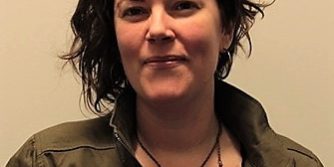 Carine is Executive Director of the Réseau santé en français au Nunavut, Nunavut’s French-language health care network. She lives in Iqaluit with her spouse and her three sons and is highly involved in French-language affairs at the social and community levels. During her years in the North, she has been a member of the board of directors of the Association des francophones du Nunavut and has been chair of the Centre de la Petite Enfance Les Petits Nanooks, a childcare centre. She was also a founding member of the Association des parents francophones du Nunavut, leading her to become treasurer of the Commission nationale des parents francophones. In addition, Carine helped establish the Théâtre Uiviit, Nunavut’s first theatre company, on whose board she continues to serve. She has been a commissioner of the Commission scolaire francophone du Nunavut, the French-language school board, since October 2015.