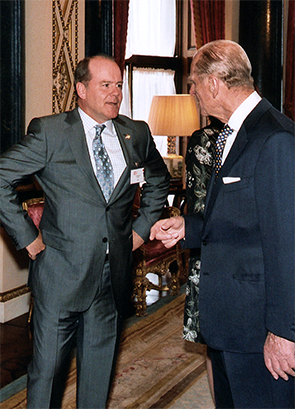 If one has received a letter or written statement from HRH The Duke of Edinburgh, one is witness to a clarity of thought and economy of pen second to none.

Consider this: “The structure of the conferences has remained constant simply because it has been shown to work. The principal of learning by observing and discussion was established from the inception and every opportunity is provided for opinions and assessments to be debated forcefully, but objectively.”

Here is the essence of the Duke of Edinburgh’s study conferences, designed by His Royal Highness, initiated in 1956, and continuing to challenge the assumptions of up and coming leaders 62 years later in the Emerging Leaders Dialogues and the Canadian Leadership Conferences. By design, it is the only leadership program where one completes the curriculum quite aware you know less at the end than when you started.
[/symple_column]

[symple_column size=”one-third” position=”last” fade_in=”false”]
Once again, Prince Philip: “The purpose of the conference is to look at the tensions, problems and opportunities created by this dichotomy between industrial enterprise and community development.”

Here the study conference process – the plenaries, the study groups, the strict Chatham House rule, the vigorous but respectful debate, the report-backs on observations (not recommendations), and of course the diversity so critical to the experience.

In Canada, some have questioned the value of investing significant resources in such a relatively small group of participants. The analogy used in response is that it is like adding a drop of red wine to a glass of water. It changes everything. Developing more mindful and sophisticated leaders changes the societies in which they operate.

This volume celebrates the achievement of Prince Philip – his gift to us all and to the Commonwealth countries, and the under-reported fact of how much he has personally cared about improving civil society. And now the task of extending this profound gift to future generations lies with those of us who have been the beneficiaries.
[/symple_column]