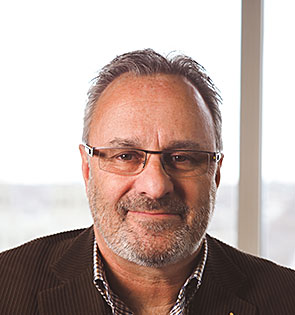 [symple_column size=”one-third” position=”middle” fade_in=”false”]
Daniel Boyer is president of the Fédération des travailleurs et travailleuses du Québec (FTQ), a position he has held since 2013. He had served as the labour federation’s general secretary in the previous three years.

A long-time union activist, Mr. Boyer felt stirred by his role in protests against measures targeting public sector workers, and he became active in Local 298 of the FTQ-affiliated Syndicat québécois des employées et employés de service, which hired him as a union advisor in 1985. He crisscrossed Quebec defending the union’s members, serving as a spokesperson and coordinator in public sector negotiations, notably in the ambulance sector. After becoming head of his union local in 1999, he set devoted himself to the fight for pay equity for female public sector workers.

Mr. Boyer serves with the Fonds de solidarité FTQ as first vice-chair of the board of directors and executive committee member. He takes pride in the investment fund’s local officers and their role in furthering the prosperity of a tremendous economic tool for women and men in Quebec.
[/symple_column]

[symple_column size=”one-third” position=”last” fade_in=”false”]
In addition, he serves on the executive committee of the Canadian Labour Congress and on the general council of the International Trade Union Confederation. He is also a member of the Office québécois de la langue française and of the Commission des partenaires du marché du travail.