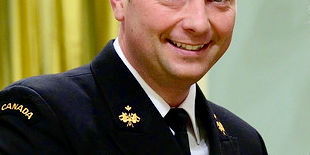 David holds the rank of Chief Petty Officer Second Class and is a Senior Non-Commissioned Member serving his 21st year in the Royal Canadian Navy. His current post is in HMCS Regina as Combat Chief. Previous responsibilities have included senior leadership positions in other ships and units, national trade advisor and numerous selection, writing and review boards and advisory groups. In 2016, David was invested to the Order of Military Merit, which recognizes distinctive merit and exceptional service by the men and women of the Canadian Armed Forces. He is a Director of a Canadian non-profit organization and co-founder of two private businesses.