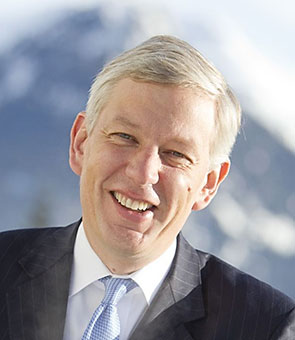 [symple_column size=”one-third” position=”middle” fade_in=”false”]
Dominic Barton is the Global Managing Partner of McKinsey & Company. In his 31 years with the firm, Dominic has advised clients in a range of industries including banking, consumer goods, high tech and industrials. Prior to his current role, Dominic was based in Shanghai as McKinsey’s Asia Chairman from 2004 to 2009 and led the Korea office from 2000 to 2004.

Dominic is the Co-Chair of the ‘Focusing Capital on the Long Term’ initiative along with Larry Fink (BlackRock), Andrew Liveris (Dow), Cyrus Mistry (Tata) and Mark Wiseman (BlackRock). The initiative seeks to develop practical structures, metrics and approaches for longer-term behaviours in the investment and business worlds.
[/symple_column]

[symple_column size=”one-third” position=”last” fade_in=”false”]
Dominic has authored more than 80 articles on the role of business in society, leadership, financial services, Asia, history and the issues and opportunities facing markets worldwide. Dominic is a co-author, with Roberto Newell and Greg Wilson, of Dangerous Markets: Managing in Financial Crises (Wiley & Sons, 2002), China Vignettes: An Inside Look at China (Talisman, 2007) and co-author with Dezso Horvath and Matthias Kipping of Reimagining Capitalism (Oxford University Press, 2016).

Dominic has received multiple awards for his business leadership and contributions to the communities in which he has lived and worked. In February 2013 Dominic received the Order of Civil Merit (Peony Medal) from former President Lee of South Korea and in August 2014 he was awarded the Singaporean Public Service Star (Distinguished Friends of Singapore). He is a Rhodes Trustee and an Honorary Fellow at Brasenose College, Oxford. Dominic is also an Adjunct Professor at Tsinghua University, Beijing.
[/symple_column]