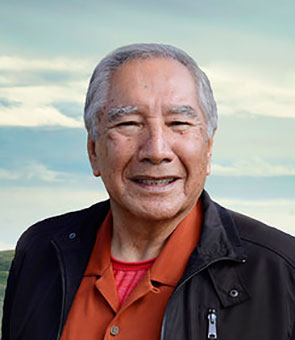 [symple_column size=”one-third” position=”middle” fade_in=”false”]
Leroy Little Bear’s lifetime of accomplishment includes some of the most important political achievements for Indigenous peoples in Canada and around the world. His dedication to education, leadership, community-building and advocacy has led to a United Nations declaration, changed the Constitution of Canada and influenced the lives of thousands of students.

Leroy grew up on the Blood Indian Reserve in Southern Alberta, one of seven siblings. His childhood was spent working on farms and participating in local cultural activities, such as Sun Dances and Pow Wows.

At age 10, Leroy attended school for the first time, at the on-reserve residential school. Despite an early love of learning, Leroy soon became aware of the colonialization aspects of his schooling. This experience influenced the educational path he would follow later in his life.

Leroy’s decision to return to Lethbridge would help define the rest of his career. As a professor, he developed courses in Native law, philosophy, history, political and social issues, health, arts and language. Through these programs, Leroy would inspire thousands of students, both Indigenous and non-Indigenous. Today, generations of graduates of the Native American Studies program can be found influencing future generations, as on-reserve teachers and principals, or leading similar Native American Studies programs at the University of Calgary, Bow Valley College and SAIT. Leroy was also the founding director of the inter-faculty Native American Program at Harvard University, where he taught briefly before returning to Lethbridge.
[/symple_column]

[symple_column size=”one-third” position=”last” fade_in=”false”]
Leroy’s legal background and prominence in Indigenous advocacy has led to a series of important contributions to Canadian and international law.

Leroy was an integral member of the legal team advising the National Indian Brotherhood on the transfer of Canada’s founding legislation, the British North America Act, from British to Canadian authority. He went on to act as legal advisor at subsequent constitutional conferences on Indigenous matters. His team’s negotiations resulted in the Constitution of Canada’s Section 35, which recognizes and enshrines Indigenous rights. This case resulted in Leroy Little Bear becoming the first Indigenous person cited in Canada’s Supreme Court.

As a member of the Task Force on the Criminal Justice System and as part of the legal team advising the National Indian Brotherhood on Indigenous legal matters, he has spent years working to improve the administration of justice for, and its impact on, the Indian and Métis Peoples of Alberta. Leroy has also been directly involved in strategic planning and consulting on Treaties 6, 7 and 8, and he drafted the declaration re-establishing the Blackfoot Confederacy and the constitutional framework for Blood Tribe governance, the Kainaisini.

One of Leroy’s most significant and enduring legacies is his work with the United Nations, where he helped to establish a working group on Indigenous populations. It was this working group that originated the concept and initial draft of the United Nations Declaration on the Rights of Indigenous Peoples. This declaration has since been ratified by 144 member states of the UN, and is being implemented by the Government of Alberta.

Through decades of teaching and community outreach, Leroy has influenced thousands of students and countless members of the local and international Indigenous community. His contributions to advancing human rights have improved the status of Indigenous peoples in Canada and around the world. In his life’s work, stretching from a residential school on the Blood Indian Reserve to his position of great influence in international human rights, Leroy Little Bear has given Canadians and people around the world a shining example of scholarship, leadership, collaboration and advocacy.
[/symple_column]